Vermiculite and UFFI: What Homeowners Need to Know 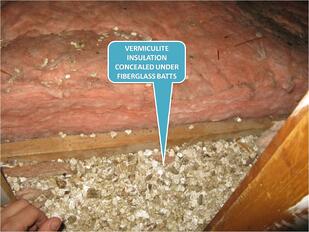 Vermiculite insulation and urea-formaldehyde foam insulation (UFFI) possess properties whose histories cause many to consider them hazardous materials. Some homeowners are familiar with the controversy surrounding these types of insulation, however many are not. Below we've outlined what each type of insulation is and why misconceptions about their safety exist.

Vermiculite is a naturally occurring mineral worldwide. When heated rapidly to high temperatures, this crystalline mineral expands into low density, accordion-like, golden brown strands. In addition to being light, vermiculite chunks are also absorbent and fire retardant. These characteristics make it a great insulating material. With the upsurge in homeownership during the baby boom, vermiculite insulation was a popular material in the 1950s and continued with the energy crisis into the late 1970s. In Canada, it was one of the insulating materials allowed under the Canadian Home Insulation Program from about 1976 to the mid 1980s. Sold under various brand names, such as Zonolite Attic Insulation, the insulation came in big bags. Thousands of homeowners simply opened the bags and poured the vermiculite into their attic floor, as well as down exterior walls.

The majority of the vermiculite used worldwide was from a mine in Libby, Montana. As well as being rich in vermiculite, this mine had the misfortune of having a deposit of tremolite, a type of asbestos. Asbestos minerals tend to separate into microscopic particles that become airborne and are easily inhaled. People exposed to asbestos in the workplace have developed several life-threatening diseases, including lung cancer – workers in and around the Libby mine developed serious health problems. When the vermiculite was extracted from the mine in Libby, some tremolite came in with it, posing a potential threat to homeowners.

If the attic or walls of a home contain vermiculite insulation, avoid disturbing the material. Do not sweep it, vacuum it up, or store belongings in the attic. If work is planned that involves these areas, like installing potlights in a room below the attic, send a sample of the vermiculite to a lab for testing. If it is found to contain asbestos, or if you assume it does, precautions should be taken. The safest approach would be to have the insulation in the affected areas removed by a qualified environmental contractor.

UFFI is injected as a mixture of urea-formaldehyde resin, an acidic foaming agent, and a propellant, such as air. It was commonly used in existing houses by injecting the foam into areas where it was impractical to provide conventional insulation, like behind walls. When the mixture is injected into the wall, urea and formaldehyde unite and “cure” into an insulating foam plastic. Some formaldehyde gas is released during the on-site mixing and curing. It is this by-product of the curing of the foam that became a controversial issue.

UFFI was used in the 1970s, most extensively from 1975 to 1978, during the period of the Canadian Home Insulation Program (CHIP), when financial incentives were offered by the government to upgrade home insulation levels. The insulation was banned in Canada in December 1980. It is estimated that over 100,000 homes in Canada were insulated with UFFI. The insulation was also used extensively in the United States during the 1970s and has also been used in Europe over the last thirty years. In the U.S., the Consumer Product Safety Commission banned the sale of UFFI in 1982, and shortly thereafter a law prohibiting the sale of urea-formaldehyde was enacted. In April 1983, the U.S. Court of Appeal struck down the law because there was no substantial evidence clearly linking UFFI to health complaints. Still, UFFI is not widely used in the U.S. today. UFFI is still used in Europe where it was never banned and is considered one of the better “retrofit” insulations.

A laboratory study which produced nasal cancers in rats that were exposed to high levels of formaldehyde caused government concern. Following some press releases and cautioning by authorities, a number of homeowners began to report problems that included respiratory difficulties, eye irritation, runny noses, nosebleeds, headaches, and fatigue. Although there were no substantiated problems clearly attributable to the foam, UFFI was banned as a precautionary measure.

A number of studies have been done examining the health effects of UFFI. Studies done before the ban, using random samples of UFFI and non-UFFI homes, showed no impact of UFFI on health. However, studies done after the ban showed increased reporting of symptoms, even for such things as constipation and deafness, which have no biological basis.

After the longest and most expensive civil case ever held in Canada was concluded in the Quebec Supreme Court, not only was no basis for a settlement found, but the plaintiffs were obliged to pay most of the costs. The conclusion to be drawn from all this is that UFFI has not been shown to be a health concern. However, as a result of its history, UFFI related fears and concerns remain.

While UFFI has been proven to possess minimal health risks, and vermiculite insulation presents no threat when left undisturbed, both types of insulation continue to be viewed as hazardous by the general public. Although we encourage homeowners to educate themselves beyond these misconceptions and historical inaccuracies, we also recognize that many living with these types of insulation might feel more comfortable having a specialist take a closer look at their home.

If you are worried about the air quality of your home having an assessment performed by an environmental specialist can provide you with some added security. Carson Dunlop has partnered with a number of reputable and qualified companies to provide specialty services to our clients. These services complement our Home Inspections, targeting potential areas of concern which fall outside the scope of a regular Home Inspection. Our customer service team can now help to schedule Indoor Air Quality Assessment or Asbestos Testing, as well as other Specialty Services. This new program allows us to provide our clients and real estate partners with fast, easy and cost-effective access to qualified specialty service provides all within a single phone call. To learn more about this program and the complete list of services we can help to schedule, please click here or call 800.268.7070.

Keep Unwanted Pests Out of Your Home

With over 35 years in the Home Inspection industry, at Carson Dunlop we recognize that when it comes to real estate transactions time is a valuable commodity. With extended service hours, online booking and weekend availability, we aim to help save our clients and real estate partners time throughout the Home Inspection process. The launch of our Specialty Services program means we’re able to save clients and real estate partners even more time. The ability to provide access to a wide spectrum of services with a single phone call is something we are pleased to be able to offer. Now our clients are able to seamlessly book a Specialty Service with ease and save themselves the headache of trying to find a quality specialty service provider.

Carson Dunlop has partnered with a number of reputable and qualified companies to provide Specialty Services to our clients as a means of facilitating requests or concerns that fall outside the scope of a Home Inspection. The Specialty Services program is launching with the following services:

The program will make adding these services during or after a Home Inspection simple, fast and easy. Carson Dunlop client care consultants will manage the booking, co-ordination and payments of these Specialty Services to help set a new service standard in the Home Inspection industry.